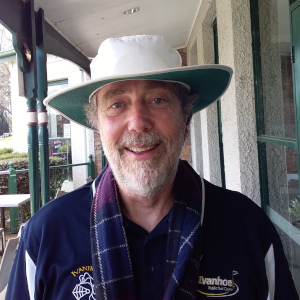 .  The day arrived just as the footy gods called it – Geelong v Sydney in the Grand Final but before that little game we gathered at the Hoe for a lovely day’s golf.  The course was still a little damp in places and grass had not been mown for a while, making for a lot of lost balls, found balls and clubgrabbing shots – plus the greens had been sanded. We all have to play the given conditions! It was noted that of the 10 starters, 8 were from the Senior’s ranks. SOS and Chris J the only young ‘uns. Some of the players rocked up in their footy team colours and as it turned out, the Blue and white hoops brigade backed a winner – Go Cats! (writer’s privilege). There were plenty of ducks and wood hens and lorikeets and magpies around today but no swans (seems like they didn’t turn up in Melbourne at all today)

Comp Winner today was Michael Gourlay handing in a card of 71 off the stick and a Par round of +1. He played a very consistent, neat round of golf however one complaint of his behaviour was reported – SOS insisted that at one stage in the round he had been bitten by a wasp/bee (he is allergic to them too) but Michael told him to man up and get on with the game refusing to ferry SOS to hospital !!  “Bastard” says SOS. (SOS survived the sting but went on to post a forgettable score on the day). Also today poor young Chris James unfortunately did himself a back injury early in the round at the second tee and had to withdraw from the game – get well Chris with the Annual Challenge in Cobram coming up in 2 weeks.

After starting with 6 wipes Targe stepped up on the 7th tee and hit a beauty straight at the pin and it rolled about 25 feet past. Michael enthused all the way down to the green that with 2 shots on the hole, if Targe could sink the birdie that would be a net zero  (gotta love net zero said Michael the Greenie) and a triple plus! Alas three putts later it was just a regulation plus for Targe. Good to see you back on the course Targe.

On the first tee, Blighty teed off into the wild wet yonder, only to not find it when the group got down to ground level. Blighty promptly walked back to the tee to hit another ball (being 3 off the tee on hole 1 in a Par comp was said to be ambitious at least) only to be called back when the others found his first ball …..  Blighty went on to play to his handicap and register a square round (?!) for 2nd place. The new Mr Consistency, Chris J Priems kept his head and came in with a -1 to take 3rd place. He’s looking forward to the Annual Challenge by keeping a very useable handicap. Geoff Lyall posted a score of -2  to come in 4th, collecting the NTP along the way on the 4th hole for the huge sum of $10 – don’t spend it all at once Geoff. Coming in equal 5th on -3 were the original Mr Consistency, Craig Cameron for another competition point and Gordo, the original Mr Inconsistency who posted 5 minuses on the back nine.

NTPs for the Ball went to M. Gourlay on the 15th and to Blighty on the 18th.

Register to play next Saturday for the October Monthly Medal – it would be great to see a few more members playing. And here’s hoping for a break from the wet weather and some course drying over the next week.

← Grabbertree or gravity on 17 September 2022 The Return of Bradbury →