Conditions were tough again out there, dewy fairways, freshly sanded greens, long and thick first cut rough and some blustery wind resulted in some lower than usual scoring across the board. Only 4 birdies for the day reflected this although there was one member who could have almost had a blinder if not for a few late scratches, but ended up beating his handicap by 1. This was none other than Gordon, who has been away for a few weeks and the break has not done him any harm and a 1st place in the competition was well deserved.

“Michael said Gordon’s round was built on his trusty 9 iron being hit perfectly time and time again into the greens for easy two putt pars, including brilliant shots over the trees on the third and fourth. A spectacular chip in for par on the 10th also kept his round on track, but the highlight was on the 9th when, after hitting his drive short and way right, near the 18th tee, Gordo pulled out his trusty 1 iron – yes a 1 iron – and hit it flush, low and under the trees with a big left to right curve. It bounced on the hill just before the green and skipped up to about 15 feet for another easy two putt par. Michael is still shaking his head with how good that 1 iron was!”

Rob Priems, who would have thought that a -3 would have maybe snuck in for a point, but was good enough for second place overall.  Now we thought that SOS had equaled him in second, but after an official review of the score cards his score of -4 placed him in third. A birdie on the 1st and 18th holes assisted with this and 50% of the clubs birdies for the day.

Not to be outdone, there were 5 guys tied for third, with Bob, Brendon, Dennis and Jason all coming home with -4. Keeping the tradition alive, Jason in his first eligible competition scored points. Rod G ended up just one behind on -6 to take out 4th position.

Now not sure if this should qualify or not, but 5th place was shared by Michael and Ryan, with -7! Ouch. I won’t say how the others went who did not qualify in the top 5, but they did not do any better than -7…..

Seniors results today were Gordon 1st, Bob and Dennis sharing 2nd and Rod 3rd. Simon needs to lift his game if he is any chance of catching the beast. Dale who has come along with Brent and Jason put in his 2nd card today.

There were quite a few balls lost, and some could not be found at all when they appeared to land just off the fairway. The longer than usual rough caused havok and in some cases balls could not be found unless stood on.  Making up for losing a few balls, (6) Ryan made up for it by winning the nearest the pin on the 18th. There was some confusion about the placement of the money vs the ball hole, but in the end the money went to Michael who put it close enough on the 12th.

There has not been an eagle for quite a while, currently there are 19 balls in the eagles nest. Something to look forward to over the next few weeks, with the weather warming up the chances of the trend breaking are getting better and better.

There are a few birthdays during the next week, the Beast, Michael and Trevor all celebrating milestones. Happy Birthday guys.

A shout out to Matt Hunt who has been battling an unexpected health issue and is having a procedure this week to sort it out. We are all thinking of you and hope to see you recover and back out on the course soon.

It may have been the threat of sunshine, or the humiliation of Hawthorn bowing out in straight sets, but only 10 members plus two newcomers turned up to play. Things weren’t looking good at the nominated registration time as only two people were on time, however some later comers improved things to ensure an official club competition was possible.

Brent has started off in good form with some minor places in recent weeks, however came through with the goods to take out first place with 39 stableford points. He was claiming that he only had 9 points for the day when Chrispy came in from the 18th but he wasn’t fooling anyone.

Kazim played his first round with us in a while after finishing up football (eh soccer!) season, and there was no rustiness to his game as he put in a respectable 37 points for second place. He was joined by his partner in crime who followed up in 3rd position and 35 points, looks like George still has maintained an almost impeccable record of being in the points each week he plays.

The ever reliable Priemsy ended up on 32 points to come home in 4th place, and last but not least Stefan taking 5th place with 30 points. Conditions were not too bad, greens are playing nicely at the moment (at least for Ivanhoe) but there are still a few patches of mud and standing water to contend with.

Seniors results were interesting, with only two members qualifying just by turning up. Simon and Mal taking out first and second places respectively. Good to see Mal back after the colder months are behind us. Jason put in his 3rd card today and now has a club handicap for his efforts, another one of Brent’s mates, Dale,  came down for a look and put in his first card.

The ball hole was on the 4th and no one managed to put it close. The money was on the 15th and after a jackpot from last week it was fiercely contested, however Zimmer put one close to take out the cash. Mehmet was back after a few weeks off, he was hoping somehow he would have learnt how to play decent golf in this absence, but no.

The championship is still up for grabs with only a few months to go, Brendon, Bill and Priemsy all hovering around the pointy end but it could be anyone’s game.

Another cold and wet end to the week, rain clouds threatening but managed to hold off thankfully for the 16 Ivanhoe stalwarts. Par was the competition for on order for the day and scoring was not easy for the most part.

There are exceptions to the norm however and there was an eventual tie for first place, Noodles and Ryan coming in with +2 on the cards. It could have been better with Noodles +3 and Ryan +5 early on, however not getting a shot on a lot of the back 9 holes brought them down to earth.

The ever reliable Michael came in with a square card but by his account left a fair bit out there. Brenden matched his score to find himself in second place too. There were a couple of minor result changes to those mentioned after the round, SOS ended the round on -1, Eddie seems to have almost recovered from his injuries and entered a score card of -2 to come in 4th place.

Finally Scubba Steve and Brent rounded out the placings with -3 for the day. There was some interest on the day in the seniors results (mostly from Simon) and Eddie took 1st place, Blighty and Bob in second on -4 and Simon took home 3rd place. I won’t say how far back Targe was from there but it was not one of his best days.

The pro pin was on the 12th and went to Jack Potts, the ball hold was on the 15th a none other than Joe hit one close to take home the prize.

Priemsy had a day to forget on the scorecard however played a memorable shot on the 10th. Stuck behind a tree, normally the Priems luck would guarantee the ball would ricochet in the direction of the green in a favourable position. Not this time however, the ball flushed the tree, flew backwards over hit head and almost hit his own bag.

There was some debate over the drafty rule and what constitutes fair prize/penalty for not making the ladies tee. Noodles had requested a pie from Blighting rather than a middy. Even though his main argument was that a pie was cheaper, the general consensus was that only a drink, beer (or coffee) would be considered acceptable. Nonetheless blight was too nice and presented noodles with a pie for all his hard work.

Spring has begun and someone forgot to tell the powers that be as there was another freezing and overcast start to the day. Although after some threatening rain clouds looked ominous the sun came out in patches and 15 members, 1 new member and a local tried their best to tame old Ivanhoe.

Only a single member beat their handicap which proves conditions were not ideal with some blustery wind and some damp areas underfoot and only 8 birdies for the day; it was Joe who set the scorecard alight with a nett 64 and 1st place overall. Unfortunately for Joe, he was ineligible for the Monthly Medal as this was his first game in a while.   Well done Joe and hope this is the start of a solid run of points on the home straight this year.

So by default the Medal was awarded to Michael, who played to his handicap and a nett 68. Things didn’t start off too well for Michael as he hooked his drive off the tee far towards the dam and didn’t fetch much better on the second with a similar shot. However he soon caught some momentum and stormed home to claim the medal.

Third place was tied between Chrispy  and SIL Brent who ended up with a respectable 70. Chrispy is now within striking distance of the Beast on the championship leaderboard and along with Brendon it is going to be a tight finish to the year. Now this  is the first points for Brent who also brought along one of his mates in Jason who has put in his first card.  Welcome and good luck!

Matt H admitted to having some trouble out there but managed to sneak into 4th place with a nett 73. The pro-pin was yet again on the 18th hole and guess who took home the chocolates, the Numurkah bandit Matt. Rumor has it that he after cleaning up the money holes on the trip away, Matty has asked that members just give him their 1 dollar in the morning next week to save the hassle of the inevitable.

There was quite some confusing with the 4th (5th) place getters during the announcement as Priemsy was reeling out all sorts of numbers for both the final placings and seniors placings. After a considerate review of the score cards, Craig Cameron, Bob and Dennis Ward all tied on nett 74. These three also tied for first place in the seniors, followed by Targe in 2nd and Trevor 3rd after claiming that he shouldn’t deserve to get any points after playing his worst round ever.

The ball hole was on the 4th and none other than Stefan claimed the prize, however it seems that he was a bit rusty and didn’t set the score cards alright for the rest of the round. Noodles was seen moping around the 14th after claiming to have worked late and slept in his car, there were decent odds on his playing unavailability due to ‘general soreness’ after the incident with his 9 iron a few weeks back on the trip away.

The round was also joined by the club pro Andrew Kostarakis who is venturing on a new venture in life and has finalised his position at Ivanhoe golf course. Good luck Andrew in future endeavors and hope to see you around.

Happy birthday to Matt, John, Dennis, Andrew B and Ed who all celebrate milestones this week. 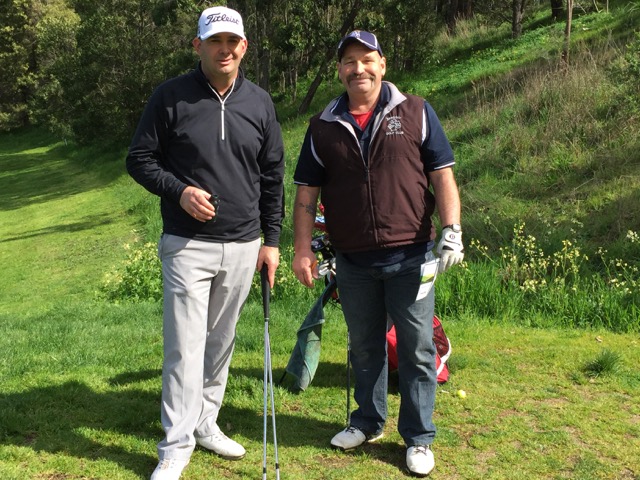